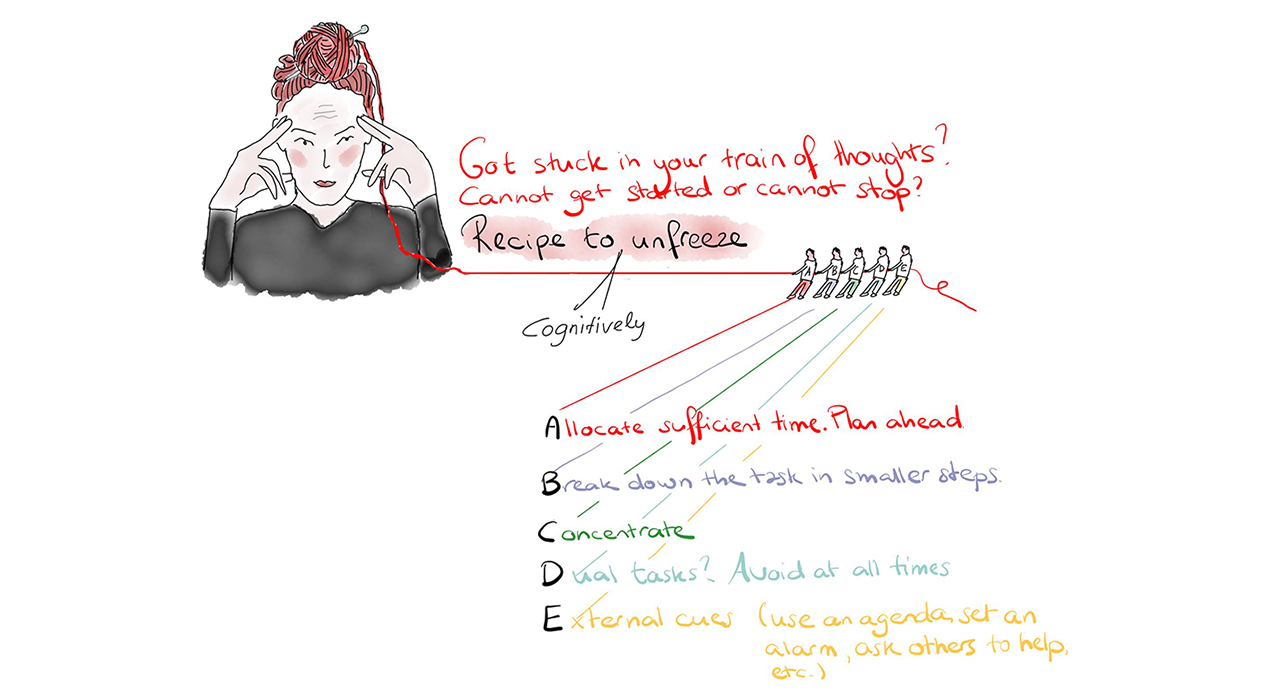 Over a year ago, I formulated a personal mission:

I have made it my personal mission to collect detours to cope with the neuropsychological symptoms of Parkinson’s. I hope to turn the insights I gain from such a collection into concrete tools which will increase understanding between patients and their loved ones. Mental freezing is more diffuse, less concrete, more of a taboo, less researched, less visible and also simply less sexy than motor freezing. That is unjustified because the impact of mental freezing on the quality of life is huge. After all, it can make you disappear as a human being | Marina Noordegraaf, May 29, 2019, in a blog about depression and parkinson's disease

Last Monday - on 22 June 2020 - my co-applicants Edwin Barentsen, Ingrid Sturkenboom, Esther Steultjens and I received the good news. The Parkinson Association has decided to honour our grant application! I consider it a great honour that our project is one of the lucky ones. I solemnly accept the trust that has been placed in us and the responsibilities that go with it.

The application in one paragraph

In a paragraph, I would summarise our application as follows:

A considerable number of people with Parkinson's disease suffer from obstacles in cognitive functioning, often even before the diagnosis. These include problems with attention and concentration, memory, speed of thought and action, keeping an overview and planning, stimulus processing and carrying out (double) tasks. In our research, we want to make visible and use the collective wisdom of people with Parkinson's and their partners in circumventing these kinds of cognitive obstacles. We do this by collecting the strategies used, organising them and then distributing them in the form of a practical self-help tool.

Our research and open science

Science is not only about what you research, but also about how you research. I am not only referring to the research methods, but also to the degree of openness you display in communicating about the research process and the research results. As loyal readers of this blog know, I am a great advocate of open science. I intend to make this research as open as possible and that includes - to start with - the open sharing of the research application. (If you scroll down, the entire application will appear).

I expect to learn a lot during this research not only about circumventing cognitive obstacles, but also about open science. I am already experiencing a mismatch between the current system of applying for grants and open science. Obtaining a grant is a highly competitive business and that does not really fit in. Open science is about the added value of sharing and cooperating, of deliberately seeking out cross-pollinations, of trusting instead of seeking out competition and of going along with the fear that someone might steal your idea. But before you know it, you are competing for the prize ... just like me ... and you are one of the lucky ones ...

However, I know only too well which great proposals did not make it to the finishing line. And I am not at all indifferent to that. Why not them and us? An awful lot of valuable research time and money is wasted on writing applications that will never be realised. You might think that there is no other way because there is only a certain amount of money to be distributed. But that is not necessarily true. Research shows that a more even distribution of research money across all stakeholders is possible and can yield great benefits(Vaessen, 2017).

Fortunately, more and more researchers are openly sharing their grant proposals, even those that have not been awarded. This has various advantages, such as:

Ideally, I would have shared the research proposal even earlier than now. This did happen on a smaller scale and the benefits were obvious. For example, we had a sounding board group looking over our proposal and some members of that group submitted their own project to the Parkinson's Association. One of them, Dr Annelien Duits, noticed that her proposal overlapped with ours and so we referred to each other. If we had known about each other's plans at an earlier stage, we might have been able to work together more effectively. After all, co-creation is easier if you know what others are doing.

There is room for more transparency in the process of grant review, which would strengthen the case for the efficiency of public spending on research ..... Once a good number of proposals are open, lots of other changes towards openness would follow across the entire research system | Mietchen, 2014

The application in its entirety

And here it is, for the enthusiast: the application in its entirety (In Dutch, that is). The only difference with the original application is that contact details have been removed. Everyone gets enough spam already ;)).

Do you already have input, ideas, wishes? Please let us know!
Furthermore, the addition of 'Update 1' in the title of this blog post speaks for itself:

Count on me to keep you informed.

This site uses Akismet to reduce spam. See how your comment data is processed.

Would you like to receive the COPIED newsletter once a quarter?

COPIED in the media